In any system, there are two kind of things happening:

In this post, I’m going to show a pattern that can make background jobs more modular.

A pattern, compared to more general principles, is something that works well in a specific context. The following technique is not universal, but it’s often really useful.

Let’s consider the simplest example: sending a reminder before an event.

There are some problems with that approach:

There are some ways to solve the problems above. But let’s consider how we can avoid them by introducing a read model for a background job.

Rather the worker pulling the data, we can push the data to the module handling the notifications:

This approach relies on two things:

What are the benefits of this approach?

The notification context owns its data. It means it can use locks to properly handle concurrency, without blocking other tables and interfering with other contexts:

This approach means adding new workers won’t cause any problems. No matter if you want to increase the worker pools, or just add more application instances, the processing will be just fine. 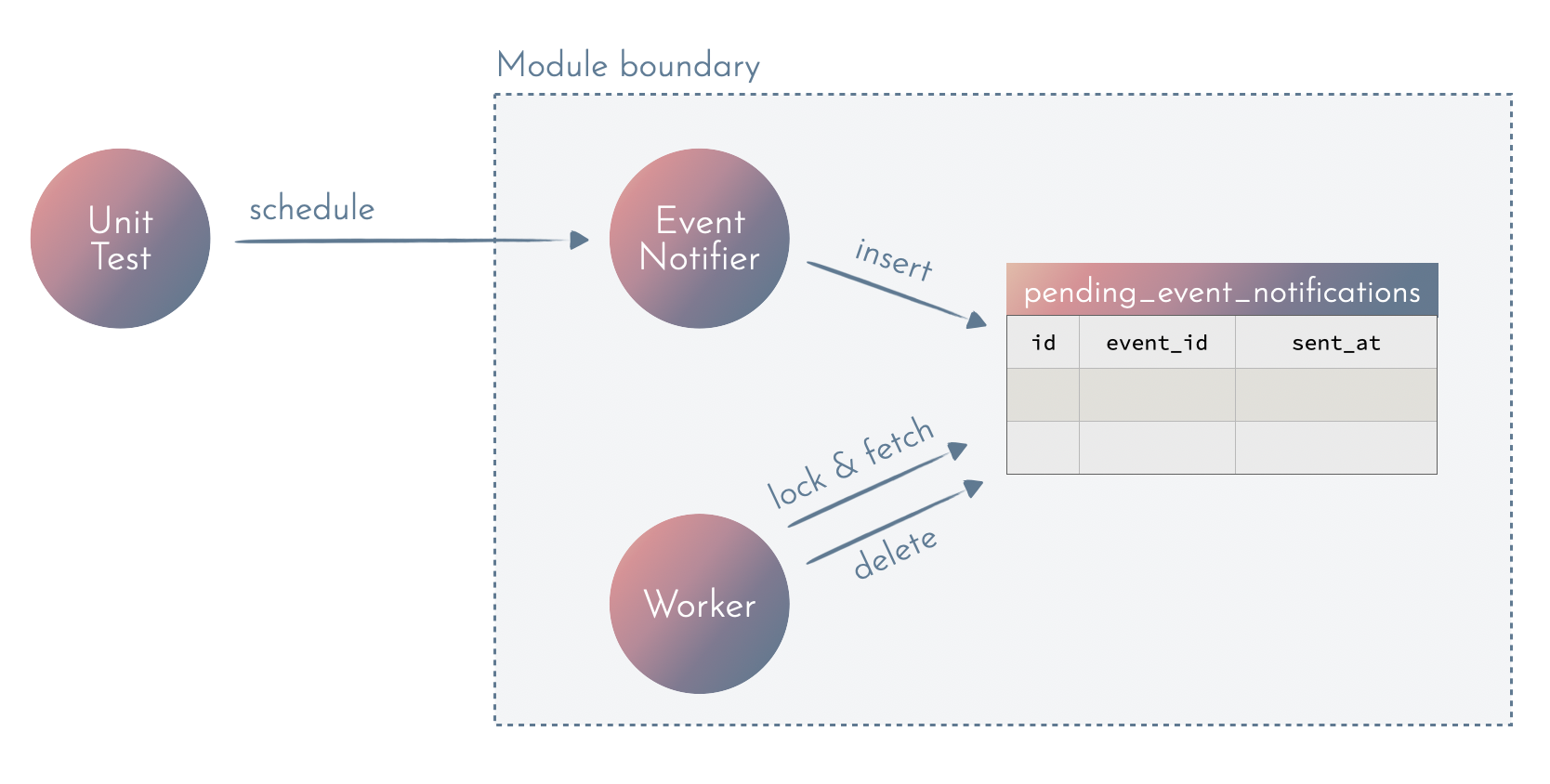 A well-isolated context is often easy to test. It’s why looking at the ease of testing is one of the things I look at when evaluating my designs.

We’ve isolated the data used for sending notifications. We’ve put a clear interface around the notifications context. This means that we can easily test that context using only that interface and avoid doing a big setup, which includes creating a lot of test data. This is both simpler to write and maintain, and make the tests run faster.

If your application deals with managing events, the events table will grow a lot (hopefully!).

This can be a mess.

An isolated table used for one purpose only allows us to fine-tune the performance, measure the execution times precisely, limit the number of entries, and use a minimal set of DB indexes.

When notifications become slow, we know exactly where to look for the cause.

It’s not only about performance, though. By isolating a part of the system, we make that part simpler. By reducing the impact of decisions to a single module, we make it easier for us to deal with most problems.

One of the benefits of modular design is that we can easily replace individual modules as long as we keep the interface the same.

We can see the same pattern in different use cases:

We can notice that some parts are the same:

The bold part is so generic that we can easily extract it from both solutions or use existing libraries like Oban (for Elixir) or Sidekiq (for Ruby):

Since the behaviour was isolated from the beginning, doing such a change is a simple and safe task.

There are also some cases when a generic background job library won’t help us that much.

Imagine that our use case is: A user is reimbursed for a purchase after their supervisor accepts the invoice, but no sooner than 3 days after the purchase.

In such cases, having a separate context handling the use case makes it easy to extend the data model to suit the needs better.

Having an isolated data models means we can easily extend that to accommodate new requirements and gather required data from other modules (tip: using events can be great for that.)

With relational databases, it’s easy to query the data and get every piece of information we need.

As a result, the default approach seems to be to write the data once when something happens (in a normalised form) and then, when it’s needed, query and transform the data.

Denormalizing data is a useful tool in a modular design toolbox. Having clear boundaries is really hard when multiple contexts share the same data. Some denormalization and duplication can really help with that.

In this post, I showed a single technique you may use to make your code a bit more modular, but I’ll leave you with a more general question for you to consider - what are the places where a denormalized read model would help you get rid of some unwanted coupling?

Ready for another article?